It was a great day on the slopes! I was on all 3 mountains today. I started with snowboarding on Morse Mountain. I had a blast carving turns on Garden Path, Sam’s Run, and Lower Morse Liftline. I switched to skis and then headed for the upper mountains. I did some GS turns on Black Snake and skied the bumps on Full Nelson. I then enjoyed the soft snow on Upper FIS. I then caught up with my son Hugh and his friend Noah for a fun run down Doc Dempsey’s Glades.

Tonight’s forecast is calling for 1 to 3 inches of new snow. Tomorrow’s forecast is also snow with another 5 to 9 inches of accumulation possible with a high of 35 degrees. Temperatures will be falling through the day. We could see a storm total of up to 14 inches of new snow by Friday. Tomorrow we plan to have top to bottom skiing and riding on all 3 mountains with 6 lifts operating, including the Madonna I lift. We have 69 trails open with terrain for all ability levels. Surface conditions are machine groomed and variable with average base depths of 16 to 54 inches. 31 trails will be groomed for tomorrow, including Smugglers’ Alley, Snow Snake, and McPherson’s for a grand total of 128 acres of freshly groomed terrain. 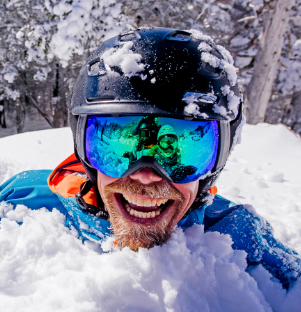 Hello skiers and riders! Thanks for checking out my blog. I've been skiing Smuggs since I was a young 'un, when my family moved to Vermont and made the resort a temporary home base. Full circle — now I'm introducing my own family to the mountain! Each day you'll find an entry and photo on mountain conditions and happenings, highlighting the great terrain we have spread over three mountains and the awesome adventures that skiers and riders of all ages can have out there! You'll also hear from Rockin' Ron Carter a couple days during the week. Maybe you'll spot him on his favorite run — Pirate's Plank on Sterling Mountain. We'll be out there on the slopes, and hope to see you — thanks for skiing and riding Smuggs!