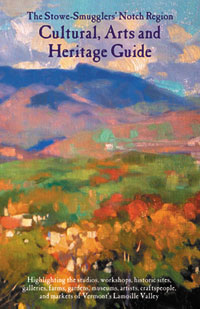 The feature stories below are about the area. Just click on the titles to see them in their entirety. For a complete guide to the area, click on the Guide cover to open it in a separate window. Right-click on it if you'd like to download it (then click on "Save Target As"). It is large, at 7.30 MB, so please be patient while it downloads.

Maple Syrup, Vermont's Liquid Gold
Vermont has been the leading producer of this delectable taste treat since the Civil War, and Lamoille County has been in the business of protecting one of the state's greatest liquid assets for nearly as long. The Vermont Sugar Makers Association began here in 1893 to protect and promote maple syrup. More maple syrup flows from Vermont-on average between 400,000 - 500,000 gallons each year-than from any other state. It takes 40 gallons of sap to make one gallon of syrup, and each tree gives about 10 gallons of sap during a sugaring season. Do the math, and you will understand why this is such a labor-intensive industry, why the acer saccharum, or sugar maple, has been named our state tree, and why the Maple Open House Weekend, and the Vermont Maple Festival have become must-do events each spring. For a listing of sugarhouses in the area, or to learn more about the events mentioned above, go to www.VermontMaple.org.
CLOSE

Covered Bridges
Covered bridges are among our most treasured landmarks. Stretching across streams and rivers, spanning decades and generations, these simple, straightforward structures are historical sites that give recognition to the men whose construction techniques changed the science of engineering. There is, to this day, an on-going debate as to why they are covered. The discussion is as broad as it is diverse, embracing romantic notions and practical applications. The most widely accepted answer, however, is perhaps the most obvious-to protect the roadbed and trusses that are integral to the integrity of the bridge. The distinctive coverings did not, and do not add to its structural strength. It is what they did do that has captured our imagination. The caps served to protect wagonloads of hay and weary travelers from sudden storms. They also provided clubhouses for local children, hosted meetings, served as boxing rings, afforded a quiet place for lovers and offered advertisement space.

Each of the driving tours contains one or more of the fourteen covered bridges within the county borders. All are listed on the National Register of Historic Places. All have a unique story to tell. If you would like a more in-depth account of the bridges you will encounter, pick up Ed Barna's book, Covered Bridges of Vermont, or get in touch with either the Stowe Area Association, or the Lamoille County Chamber of Commerce to receive a copy of the Lamoille County Covered Bridges Auto and Bike Tour. Contact information for both organizations can be found in the front of this publication.

Music in the Meadow
Trapp Family Lodge, Stowe, VT 05672.
A variety of concerts held May through September.
For more information call 802-253-8511