Bicknell's Thrush is a high-altitude songbird that makes its Summer home partially in the Northeast. During its stay here in the Summer, this thrush breeds in the higher elevations of the mountains of Smugglers' Notch and surrounding regions, after which it returns to winter in the Caribbean in countries such as the Dominican Republic.

Vermont has designated the Bicknell's Thrush as a "species of special concern." Smugglers' takes this designation very seriously, so we aim to preserve as much of the bird's habitat as possible. Smugglers' has been working with environmental scientists to help reduce impacts on Bicknell's Thrush habitat. All construction projects near their habitat are reviewed for possible impact and scheduled around their breeding season.

In addition, Smugglers' is working with the Non-Game and Natural Heritage program of the Vermont Department of Fish and Wildlife to develop a Vegetation Management Plan for Ski Trail Maintenance in Bicknell's Thrush habitat. This plan will guide annual ski trail maintenance activities to increase the amount and improve the quality of habitat on trail edges.

Black Bear
While most of the activity related to the ski resort takes place while black bears are snug in their Winter slumber, research shows that ski area development can impact the bears' use of, and travel through, previously undeveloped areas. Here at Smugglers', we have always reviewed our proposed developments for potential impact on bear feeding area (beech stands and wetlands), as well as travel corridors. Where our plans have shown potential to encroach upon bear habitat, we have worked with the Department of Fish and Wildlife to modify our projects to reduce, mitigate or eliminate any impact.

In 2001, Smugglers' began a regional study to identify critical black bear habitat to help guide long-term development planning. These efforts will continue as we gather more data to give us a better picture of what routes our neighborhood bears are using and to where they are traveling. With this information, we can better protect their critical habitat and assure their continued existence in our region.

Habitat protection initiatives at our Morse Highlands ski trails, which first opened for the Winter 1999-2000 season, were designated to minimize impact of recreation on the significant bear habitat in that area. To preserve a beech stand, an important food sources for bears, especially in the Fall, a trail that was planned to be 150 feet wide was narrowed to 35 feet. To prevent disruption of the bears' Fall feeding activity, no snowmaking, maintenance or recreational programs are allowed in the Morse Highlands trail area between September 1st and December 1st.

While in the planning and permitting stages for the West Hill development, we became aware of a significant bear travel corridor. As a result, Smugglers' made major changes in the plans for West Hill and negotiated an agreement with the Vermont Department of Fish and Wildlife to place a conservation easement on roughly 100 acres to protect this corridor. The easement was granted to the State. The corridor is used by bears to travel between Morse Mountain and the Mount Mansfield area. It is most likely used in the Spring and Fall to access feeding areas and for the dispersion of juvenile adults.


Wetlands
Preservation of wetlands during all resort development is of paramount importance. Below the Aspens development, Smugglers' reclaimed a stream and replanted it with all native species. This enhances erosion control and supports the wildlife habitat by reintroducing native trees and shrubs to this area.

The Balsams condominiums were completed in 1998. Landscaping at the Balsams incorporated a reclaimed stream riparian zone, which was replanted with native species - 108 native trees and 51 native shrubs were reintroduced. This enhances erosion control, water quality and the wildlife habitat.

Smugglers' restored vegetation next to the Brewster River by spreading topsoil and planting trees, shrubs and grasses.

A special mixture of high altitude grasses is used on the mountain to limit erosion and run-off. All projects at Smugglers' conform to Acceptable Management Practices for Maintaining Logging Jobs in Vermont (AMPS), the Vermont Handbook for Soil Erosion and Sediment Control on Construction Sites, and the Guidelines for the Design and Construction of Ski Lifts and Trails in Class "A" Watersheds in Vermont (Best Management Practices, BMPs). Smugglers' is working with the Non-game and Natural Heritage program of the State Department of Fish and Wildlife to develop a Ski Trail Management Plan that will protect and enhance Bicknell's Thrush habitat along trail edges (see Bicknell's Thrush above).

During Summer and Fall 2007, the Resort partnered with the Vermont Nature Conservancy to eradicate invasive plant species from Resort garden beds as part of the Conservancy's Wise on Weeds program. Eradication of the invasives helps promote the healthier development of non-invasive species. Smugglers' was the first business in Vermont to participate in the program. 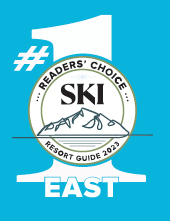